tl;dr Join the #birmingham-io channel on the BrumTech for notification of new posts on the forum.

For anyone that doesn’t know there is a very active Slack channel over at BrumTech which we’ve had a link to in the main navigation for a while now.

It’s very successful, having hosted many water cooler chats about everything you can imagine, but this success has, I think at least a little, contributed to the slowed activity here on the forum (that, and the fact I’ve not had as much time as I would like to put into managing the forum).

One way in which I’m trying to reinvigorate the forum, and remind everyone that it’s still here, is via the Chatroom Integration Plugin which I’ve installed and linked to the slack.

This offers a bunch of features (half of which I don’t fully understand yet), with the main one being notification posts within the #birmingham-io channel any time a new topic is posted on the forum (such as this one). 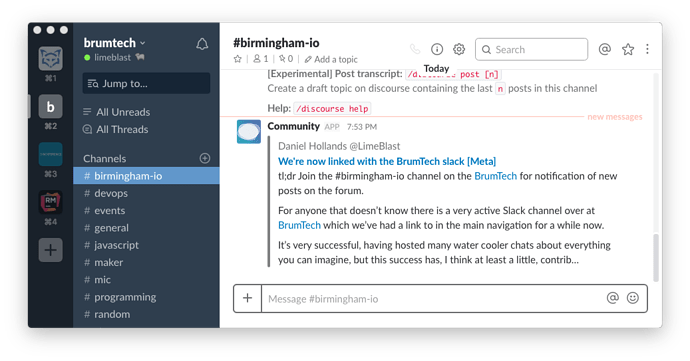 If you think this would be helpful to you, simply join the channel, and you’ll see the messages as they stream in. Right now I have it set to show all new topics, as well as replies (as most of the posts we have right now are replies to long running conversations), but if we think this is a bit too much, I can change it to only show new topics.

Anyway, I’m super keen on any feedback you might have for me, so join the channel, and continue the conversation.

I’d agree; having the slack has slowed the posting of posts on here. A huge disadvantage is that great replies are buried into slack. Therefore, any crucial topic I’d rather post it in the forum.

One of the features of the integration is that of being able to post a transcript from the slack into the forum using the /discourse post command.

I can see this being very helpful.

I also agree with @SylarRuby.