I’m not going to split the thread again but I’m really interested in solar power too. Maybe it deserves a thread of its own. It could be something Brum becomes great at. I don’t think the big energy companies are making a very good job of it because they’ve become commodity players and forgotten how to innovate.

Maybe it deserves a thread of its own.

TBH, I rarely see solar panels on houses anywhere - is britain just not sunny enough to make it worth it? Should we invest in home-based wind power, or maybe home-based hydro - generating electricity from all the water that pours down the drainpipes from our roofs

There is a house in Lichfield which has panels on its roof, which gives the house an unusual look, but personally I love it as I’m exactly the sort that would rather go for form over function - but I can understand that not every else agrees.

The first thing I’ll say it that my ex-colleague who looked at this stuff says the government backed the wrong technology. Solar thermal was the way to go for the UK but photo-voltaics are very interesting for electronics because unlike wind, they naturally produce DC. The other key technology for renewables is batteries. It isn’t always sunny, rainy or ‘blowing right’. Wind turbines don’t work in high winds!

I went by huge solar farms under construction by the M5 last week. It’s certainly cost effective with government subsidies. That’s why the energy companies want to rent your roof. The electricity infrastructure is all wrong for distributed generation though. Most of the early PVs face the wrong way too because people were given advice to maximise generation, not return on investment. PVs are less efficient when hot so hot countries are at a huge disadvantage

National Grid use cheap electric to pump water up hills, to generate with hydro later, when prices are high. I catch rainwater off the roof in a water butt then a valve lets it divert once full. I don’t know what the energy yield might be. Doesn’t matter, if the device is cheap enough. Water is heavy though so solar-powered rooftop pumped storage could be tricky on flat ground.

I have other ideas but they need more work before I’m willing to share and they may be valuable.

There’s plenty of PV out here in the sticks but they do tend to be ugly suckers. My daughter is an architect and she’s recently had a hell of a job sourcing some panels that don’t suck. The ones that looked good were inefficient.

There’s plenty of PV out here in the sticks but they do tend to be ugly suckers. My daughter is an architect and she’s recently had a hell of a job sourcing some panels that don’t suck. The ones that looked good were inefficient.

The ones on the roof in Lichfield stand out, because they’re just plonked on the roof. Similarly with my one, which of course is much smaller than the roof ones: I wonder if building a roof out of them, or building them into a roof, might solve these issues?

I think that’s what she was doing but they come in a very limited set of shapes and sizes and I think they wanted a single dark color that wasn’t black.

Not that you can tell from the photo, but mine is a very dark blue - although it’s dark enough you might as well just call it black.

I had to look that up, but I’m glad I did, because that seems cool.

Does anyone know of a good description of how PV panels work e.g. are the smaller rectangle individual cells? I’ve thought of them as a black box solution with light in and and an electrical interface. I’d like to know what’s going on inside now. I read about a teenager in Africa who was making them out of scrap to share mobile phones in villages without electricity. It was life-changing.

The smaller rectangles themselves contain an array of individual cells. NASA explains it very succinctly here.

The bottleneck in mass renewable adoption is storage. Current battery tech isn’t cutting it. [Bill Gates is funding some of the research to tackle this] (https://itunes.apple.com/gb/podcast/stuff-you-should-know/id278981407?mt=2&i=363504460). Look for podcast episode titled “The Future of Renewable Energy featuring Bill Gates” dated 23 Feb 2016.

Also, Britain would be better off with focusing on wind and tidal. Not enough solar radiation.

Britain would be better off with focusing on wind

Also, Britain would be better off with focusing on wind and tidal. Not enough solar radiation.

It seems there’s a fair amount of it: 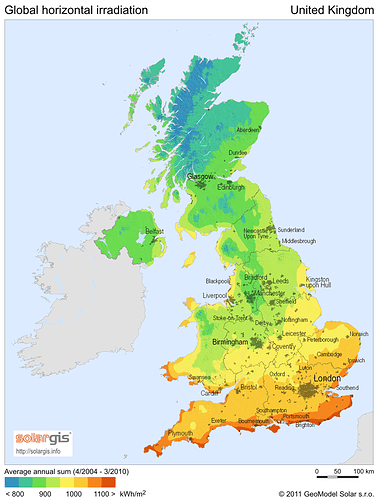 Looks like Birmingham is just under 1MW/year/m². Interestingly, Birmingham Science Park have apparently installed a load of PV panels (there was a building-wide power outage over the weekend while they hooked it up).

Energy usage in the UK is about 5.4MW/person/year (source: http://data.worldbank.org/indicator/EG.USE.ELEC.KH.PC ), so we’re looking at 6m²/person to be 100% covered by solar power alone.

Yes, we can probably generate more electricity using wind and tidal power, but given the amount of (essentially unused) roof-space we have in the UK, it can’t hurt to have some solar as well. I don’t think anyone would propose using solar power alone (as you say, we could probably generate more from wind and tidal power), and we should even have backup oil/gas/coal power plants as well. 100% supply from renewable energy is a wonderful aim, but we should be pragmatic about this.

One thing that doesn’t seem to be widely available is combined solar PV and thermal panels - may as well make use of the panels to generate hot water while they’re generating electricity, rather than ignore it and use the electricity to heat water later.

I knew the Solar GIS thing was going to come up. Always does. I wish they added a few caveats on that page to stop the map from being taken completely out of context

I should have been clearer, my apologies. The problem is the areas where there are vast amounts of land available for solar farms do not receive enough solar radiation to justify the large economic investment required in moving the country towards solar. There is no ROI in solar for most of Northern Europe.

I am speaking strictly about government-level efforts required to maintain energy security in the UK. Putting solar panel on roofs is a good personal choice, but it falls flat on its face economically because governments can’t get the economies of scale engaged that countries like China can by investing in solar farms. Hence my statement that Britain should focus on wind and tidal, not because we can’t do solar, but because it’s entirely pointless to focus on something that we are clearly so behind in technologically.

By investing in wind and tidal research we stand a better chance to come up with breakthroughs in efficiency that can then be exported to the rest of the world. The developing world is now investing more money into renewables than the developed world. Instead of fighting for the solar industry pie, which will inevitably be split amongst India China and the States, we should instead focus on other renewable sources where we stand a chance to be world’s best and not just a me-too. We have enough energy for the foreseeable future to run around experimenting with things the developing world can’t. Energy is a business after all.

Completely off-topic, fun fact most solar panels in the UK are facing the wrong direction

EDIT:
On a second look, it seems like you didn’t account for the ultra poor efficiency of solar panel, not all solar radiation gets converted to electrical power. I’ll probably run the math when I get home and report back if I got it right or wrong.

I didn’t account for a lot of things, it was a back-of-an-envelope calculation - as an engineer, I would have de-rated by 50% anyway, so would have probably gone with at least 12m²/person even during daylight hours.

There was a long-running joke in the energy lab IS skunk-works where I worked about ‘the cow-a-station’: a wind, methane AND milk capture solution that dealt (possibly slightly too) directly with a major source of greenhouse gasses!

There was all sorts of funding available for innovative energy solutions and we really thought we were onto something but no-one ever listens to the computer geeks until they’re asking if you’ve tried rebooting Windows:
“Well no, I was in the middle of something important”
“Yet, you use a Windows PC.”

Another great idea I saw rejected was walls of tiny windmills along the side of the motorways to catch the WHOOSH! as the lorries go by. My internal blog was called “Thinking Outside The Box”, because reasons.

I know what your thinking: “How can he ever have other ideas that are any better than THIS?”

The next 2 generations of PVs are already in development and efficiency is set to increase considerably. That’s one of the reasons it was a bad idea for the UK government to provide seed capital then pull out of the market. We should hvae let the sunny countries that can afford to have inefficiency for the next 20 - 30 years be the early adopters, then come in ‘late but good’, like Apple do.

walls of tiny windmills along the side of the motorways to catch the WHOOSH! as the lorries go by

Magnets on vehicles, coils in the road - would also allow you to track when a section of road is being used, and any road-lighting could intelligently turn themselves on/off when required (would need some kind of backup detection for vehicles not fitted with the magnets, though)

They don’t get lights?

Magnets are becoming a bit of an issue for wind-turbines; along with appalling reliability due to them being jet engines really. Magnet materials tend to come from war zones and cost lives. If someone could invent a silicon-based generator, we’d have plenty of sand for a few years. They did it with step-down transformers, so how hard can it be?

Oh yeah… and the retarding effect on the movement of the cars might be considered A Bad Thing. There would be a bit of that from the whoosh! bounce-back but I think it could be controlled.

I read a sobering thought recently that everything we have on our planet has been here from the start or arrives from space, mainly as sunlight. Our mission is to learn to live on just the real-time sunlight or die.

The Centre for Alt Tech does solar courses. 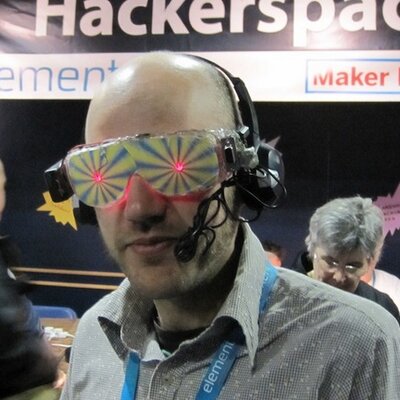 Getting things set up before teaching weekend of Solar PV at @centre_alt_tech Check out their future courses: courses.cat.org.uk https://t.co/IcQnScpVa9 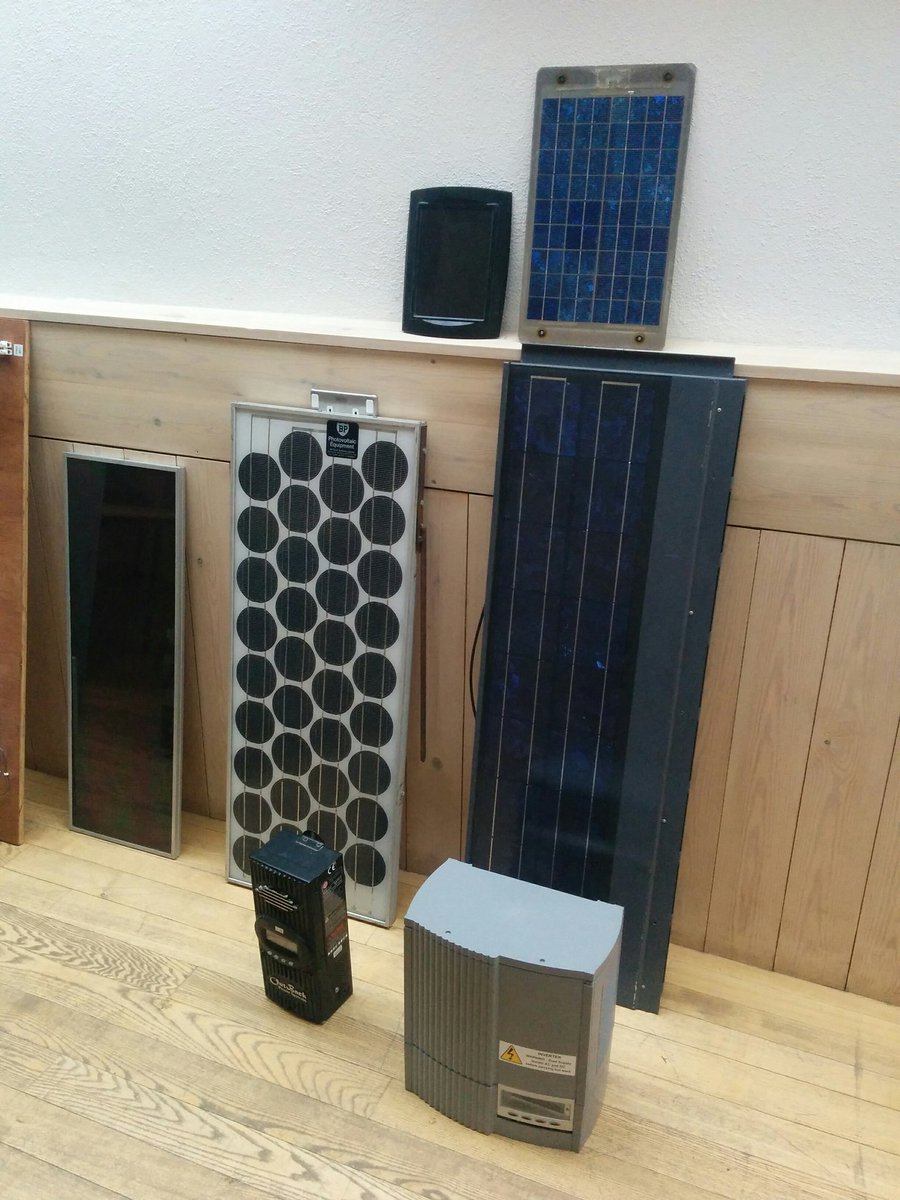 I went there years ago with my kids and we stayed in a lovely, though basic, camp-site within walking distance and cooked standing beside a stream.

You can clearly see how the centre panel is wired and it uses the layout I’ve been playing with.

Solar panels get a face-lift with custom designs

Startup aims for wider U.S. solar adoption with photovoltaic panels that can display any image.