Radical plan to break up Birmingham into Boroughs 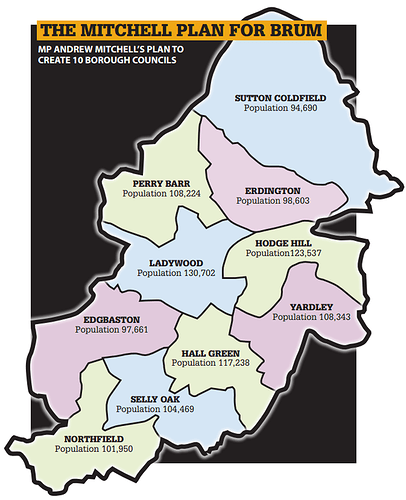 What does this actually mean, though? Also, where would I be? I live in central brum, very close to Snow Hill station.

Also, where would I be?

The boundaries are the same as the Parliamentary constituencies. So… who’s your MP? If it’s Shabana Mahmood, then you’re in Ladywood.

What does this actually mean, though?

According to the article “areas such as Edgbaston, Hall Green or Erdington would have their own local authorities collecting council tax and providing key services”.

This feels like a distraction. For me, the fundamental problem with Birmingham’s governance structure is that a large proportion of the people who work in, play in, or regularly travel around the city have no democratic influence over city-wide policy. There should be a greater Birmingham authority like there is in London or Manchester.

(I live near Stourbridge)

I think its complicated. I live in Edgbaston so that is less relevant for me. This is really about the city itself, and the devolution of powers to the city region is something else.

As for the city, the city council is clearly failing, the trojan schools and the deprivation in places like Hodge Hill and Ladywood. The fact the inspectors are in from Central Government and then the fact that the Leader Albert Bore has quit. The fact that all the contenders to replace him are either inexperienced or mad.

Birmingham is the biggest authority in Europe and has been mismanaged for years. Breaking it down sounds sensible, however my fear is that areas like Ladywood and Hodge Hill where there is little prosperity are cut adrift from areas like Edgbaston and Sutton where there is. This is after the Conservatives have used the funding model for Local Authorities already to penalise deprived areas which tend to be in large cities. So this is a second round of penalising deprived areas and allowing them to sink. That bothers me.

However Birmingham is probably too big and could do with a radical shake up.

I think to your substantive point about the prospects for the City region this would be positive. A lot of the anti Greater Birmingham sentiment comes because the City Council would be too great a power block in any City region. By splitting it up it dilutes any one areas’s dominance over others. So if done right it would make proper devolution along the lines of the Manchester deal more, not less likely in my view.

Much interesting discussion around this: there does seem to be a little bit of a feeling that this Tory MP’s underlying goal for this is to separate out Conservative Sutton Coldfield from non-Conservative everywhere else; this is why there are 10 tiny boroughs, rather than 5 which are the same size as other nearby areas such as Dudley or Solihull or Coventry. I’m not sure I necessarily buy this, but there is at least one grain of truth in it…

How very Conservative to want it to be tree structured, with Sutton C’Field at the top. Are the boroughs of equal population size? The gardens get a lot bigger as you head North.

My sense is there is a plan to split Birmingham up, and this is a Sutton MP’s preemptive march to split it up in Sutton’s favour.

I.e. the boundary lines as drawn are Mitchell’s fantasy, the the fact of a split is real. The really interesting part will be how the split is done, in the interests of the middle class of Sutton and Edgbaston, or the wider interests of the people of Birmingham.

Personally I’m a fan of an elected major, but open minded as to other forms of government. Either way - I’d like the people at the top to be elected rather than recruited.