Looking for some ops help with updating this server

For the background, check out this thread:

I’m trying to run ./launcher rebuild app on my app, but everytime I do, I get this error: ERROR: Docker version 1.9.1 not supported, please upgrade to at least 17.03.1, or recommended 17.06.2 Can someone point me in the right direction for updating...

Long story short, I need to update docker on the server - but docker scares me, and by the sounds of it, if I fuck up, I’ll have to re-provision the whole server (which means getting in touch with Bytemark).

So, with this in mind, is there anyone willing to spend an hour or so with me to try and sort this out, please?

Hmm, not seen this one before. Happy to try to help.

It sounds like the build of Discourse needs a newer version of Docker. This is either an error with the launcher script - presumably that’s a shell script that’s part of Discourse - or maybe Docker has detected that a new build image is not compatible with the current version. I’ve not heard of the latter, but it is quite possible.

Am I right that the database and settings for Discourse are outside of this image, either in another container or in an on-host volume? Getting a backup in place is the first thing, I would say.

My guess is that once you have a backup you’re happy with, you just need to:

I’m sure some downtime would be fine, so it’s not like it has to be done in a rush

Happy to help over a beer, if that’s of use!

I’ve been having a chat with @alexrussell over on the slack channel about this issue, and we’re going to get together at some point Tuesday evening to have a look at fixing it. You’re more than welcome to (virtually) join us then?

(I’m sure I can post all parties some beer tokens, hahaha

Looks like it’s a case of docker upgrade - but as mentioned on the thread on the discourse forum do a full backup first just incase.

Are you running the OS version of docker or did you manually install docker when provisioning?

Edit: depending on time Tuesday evening I’m happy to assist if required. My docker knowledge isn’t expert level but have done a bit with it

Plans to do this this evening have fallen through, so we’ve rescheduled for Friday at around 8pm. If you’re not already a member of the Slack channel, now might be a good time to sign up.

@halfer @Mr_Tom we’re going to take a look at the server this evening, around 8pm-ish.

To keep things simple, it might be best to meet upon the slack channel so we can use the voice chat features contained within. Once you’re there, post a message in #general or something.

@LimeBlast I’m not about 8ish sorry, but I should be able to join you from about 9 if you’re still having fun

And we’re back. All we needed was to update Docker using the supplied command - but I’m very happy to have the backup of a couple folk who know what they’re doing as a safety net.

So thank you very much to @alexrussell and @halfer for their help with this. 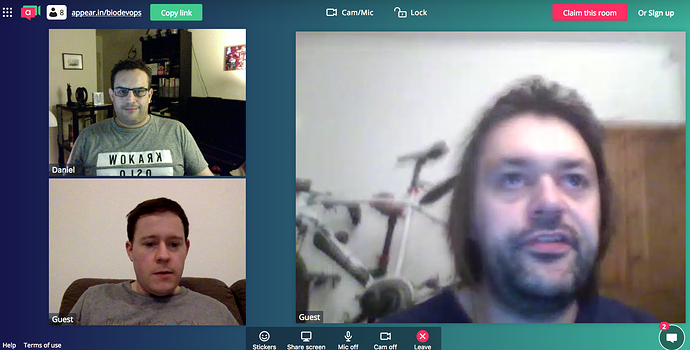 The next issue will be updating Ubuntu to something more recent than 14.04 - but I’ll worry about that next year

I look a bit blurry - am I tipsy, or is that the viewer? Answers on a postcard!

No worries, we were answering the question “how many software engineers does it take to screw in a Docker lightbulb”. Turns out the answer is just one!

Turns out the answer is just one!