I built an Infinity Mirror

Nothing too exciting here, but I wanted to share with you the end result of the Arduino class I completed over at Instructables.

I’ve mentioned Instructables before, and enrolled in a few of their classes when they became free, most of which are still in progress - but not the Arduino one, which I officially completed by building the infinity mirror.

It’s very rough around the edges, being made mostly out of foam board (which seems to be the perfect material for a project like this due to its low cost and simplicity to work with), combined with a small mirror, a small piece of two-way glass, and some WS2818 LEDs powered by an Arduino Gemma.

Although I’ve not officially documented the build process, I do have some photos sent to friends showing the various stages, which I’ll look into putting into a gallery to show anyone that’s interested. Watch this space.

Anyway, as part of my new year’s resolution to complete more things (before starting new ones), my next target is the Electronics class, which has multiple smaller projects for each of its chapters (most of which I’ve slightly cheated on by submitting projects I did as part of the zombie maker book). The current lesson is about resistors, and has me building an audio mixer - no ability to weasel out of that one, so right now I’m just waiting for the components to be delivered.

(what use is a hobby that doesn’t cost lots of money, eh? 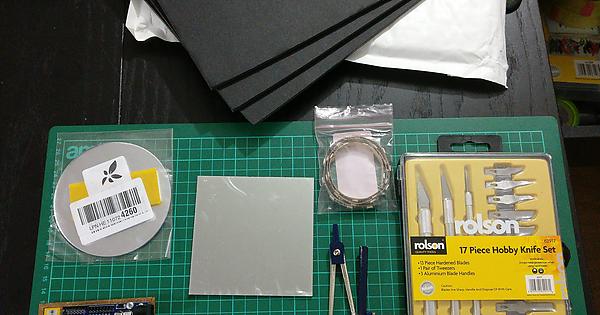 (what use is a hobby that doesn’t cost lots of money, eh?

Heh, though I’d say that once you have bought an Arduino, the other pieces are relatively inexpensive. I suppose the problem is if you build a bunch of projects that require the Arduino to be left inside, and so you need to purchase another!

I should probably start keeping track of how much individual projects are costing me. I started, kinda of, doing this with the zombie maker blog, but my ability to do many more of the zombie projects is hampered by the fact I’m living in a flat. I need a shed.

Anyway, I can see this being split into two lists, one with the components and equipment I had to purchase for the project, and one for the stuff I already had.

Let’s very quickly do it for the infinity mirror:

What I already had:

Out of all this, the Gemma, some of the wires, the all-purpose glue, and the momentary switch got consumed, along with some of my glue sticks and solder, otherwise all the above is still in my inventory.

What I purchased for the build:

This comes to just over £30 in total. The first three items in this list got consumed in the build, as did 19 of the 30 LEDs on the strip. The rest lives on for use in future projects.

I’ve already ordered the components for my next build (which I’ll show off once it’s done) which cost about £15 in total.

I think costing your projects is a really good idea. You should include your time too. It can be free but knowledge of how long things take compared with how long you thought they’d take is a useful feedback loop to improve your estimating and help you decide whether future projects are worth starting. I don’t mean estimating the whole project, just the next stage or two.

I think my wife’s estimates of DIY projects are over-optimistic. She thinks I’m slow and fuss too much about preparation and details. When she tries, I think it takes me longer to fix what she’s done than it would have done from the start, but we don’t have data.

I’d not thought of including time costs because these things are fun for me to do, and if they weren’t fun, I’d not do them. But it might be worth keeping track of that as well anyway.

I think the build time for the mirror was probably around 6-8 hours, spread out over 3 days. Maybe I should actually time it when I do the next one.