Brum, Brum - the economist has something nice to say ;)

Horraay: cheered me up to see this: 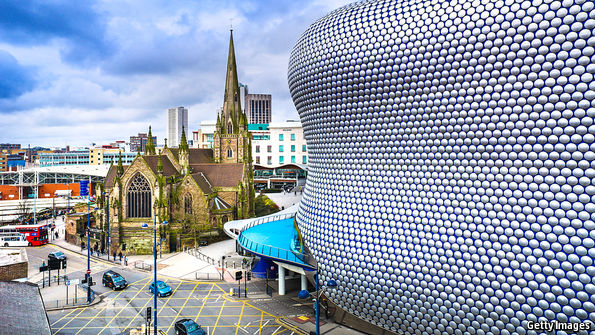 As the North East rejects a devolution deal, the West Midlands embraces one

Ya, that was good wasn’t it? I liked that

Ya, that was good wasn’t it? I liked that

I must have missed something, because I remember us plebs being asked to vote in 2012 whether we wanted an elected mayor or not, and the proposal was firmly rejected. Did the electorate change their mind and I haven’t been paying enough attention, or are the powers-that-be just doing what they like?

‘Devolution’ is normally assumed to be a democratic process though. Theresa May can’t bring herself to devolve power to her own cabinet. It’s understandable, I admit. She seems to have appointed idiots. I’ve noticed she uses a technique of saying one thing and hoping no-one notices she’s doing the exact opposite. She varies it with saying 2 things that contradict each other. Their approval rating is +7% apparently so it obviously works.

Having repeatedly voted against the City having a mayor (the rest of us haven’t been asked) we now have 1 person whose future political career may be in Westminster, agreeing to do what Westminster want, for the common good, for no more payback than being allowed to do what ‘we’ want. There seems a contradiction.

Given that Birmingham has acted in an extremely centrist way throughout, I’m pleased to be in only 2 of the 4 West Midlands I’m currently aware of. I’ll watch with interest from outside, as I do Europe.

I love Brum though. I hear the New Walsall Art Gallery might close. It’s that or social services. Don’t get me started on the Staffordshire businessman I was talking to last night, who’s 30 year old business almost went down the tube in 3 days through the Brexit currency drop.

At least twice, I believe. No, nothing has reversed that democratic decision (democratically.)

Having lived through all the London mayors and seen the benefits of improved transport, investment and image of the city, I think having a mayor can only be a good thing. Living in the West Midlands now and glad to hear Birmingham is becoming so forward thinking. Would also be interested in finding out how the asians are investing in the city as it appears to be changing through Chinese businesses.

I’m with you, Josna. If Birmingham could attract a charismatic major, it could really change things. I don’t get into Brum as much as I’d like (the trains home leave far too early), but it’s a great city with wonderful people. It deserves a lot more attention.

“Hierarchies are structures that consist entirely of single points of failure”. Why start failing at the top?

Who was the charismatic leader of The Lunar Society?

I can’t find much evidence that Birmingham ever thrived due to a strong leader, like London and Manchester did. Most of the good things seem to have been achieved by industrialists who were non-conformists and radical liberals. They saw it as their moral duty to help the poor, even Jo Chamberlain of the great big clocks and Imperial power.

For good or bad, it was Mayor Boris J. who pushed for the night tubes in
London.

And the bendy buses that killed cyclists and the water canon that were illegal to use and had to be sold at a huge loss.

He allowed a Big 6 energy supplier to provide ‘Boris bikes’ to build up his personal brand but sold exclusive advertising rights to Barclays Bank then allowed the Conservative government to blame them for energy price increases that were really due to long-term failures in energy policy by both parties that had been in government. I’m not sure he’s a very nice man.

You have a point. I still think having a mayor for brum is a really good idea. You need someone charismatic, forward thinking and ambitious for the city who will ensure that the interests of the city, and consequently the surrounding areas, are put first. Its still a post that brings benefits to the city without which you would have nothing.

What if s/he isn’t charismatic? Isn’t that why Brum got rid of the last mayor, despite the massive improvements to the city while he was in charge? I suspect he was against the idea.

He wasn’t a particularly charismatic physics lecturer either. Seemed good at thinking though.

[ Have corrected my original sexist assumption ]

One thing the London mayors have all had in common is that they are great communicators. They give the feeling that they are on the side of the people of the city and are working to improve it in every area. There is never a day that goes by when they haven’t given a positive comment in the metro on something that has happened for the city. When the Olympics were on you would think Boris was single handedly responsible for its success. And the odd thing is that when any London mayor speaks well of the city you feel that you have done well too because you think they are speaking on your behalf. I get the impression Birmingham is on the brink of great improvements in which case it will attract some interesting candidates.

You need someone charismatic, forward thinking and ambitious for the city

I had to look him up. Not a great actor, so at least it should be easy to tell when he’s lying. Grammar school, Oxford PPE, Political Researcher, Journalist, Hamstead Hill

First interview I watched about his video on Hoodie Dave, he told a female Sky journalst to “be quiet and let me speak”. Seems like he was going for a strong leader image that far back. Oh good.