We’ve discussed different projects which can exist under the Birmingham.IO banner before, of which there are quite a few good ideas - and with examples like Planet Birmingham leading the charge, I think we’re due some exciting things in the future.

What we don’t currently have, however, is a common way of linking all these projects together. The site once had a splash page, which would have been the common element between them all, but since this was removed as a bad idea (because, frankly, it was a bad idea), I’ve not had any better ideas…

…that is, until now. What do you guys think of using a Meny navigation bar? 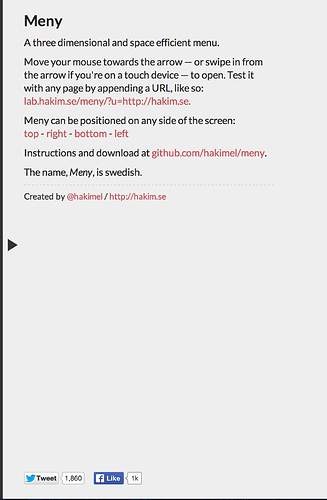 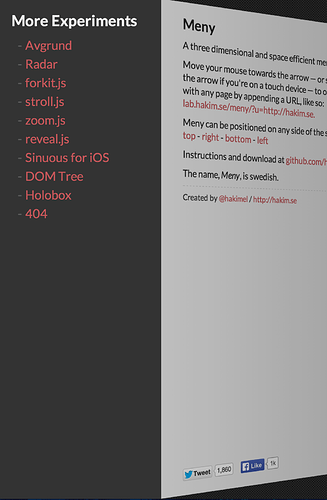 I quite like this myself, as I think it looks good, and is unobtrusive when not being used. It could be easily (I hope) added to each of the project pages, and act as a common navigation system between each project.

I’ve not really seen that UI before, maybe it’s too new though? as in people wouldn’t even expect it to work like that / discover it. I wonder if we could something more conventional, like tabs or a menu bar across the top?

like tabs or a menu bar across the top?

This could also work, I just fancied exploring some other ideas first.

I think my inclination would be to have each site link to birmingham.io, and that page to link to all the projects, rather than having each subsite link to all other subsites. That way, there’s more room; the birmingham.io front page could look like a collection of square tiles, so there’s space for a screenshot, a little description, etc; it’s much more visual. (Good page for SEO, too.)

Something like that was the intention of the original splash page (no matter how poorly I implemented it).

I’d be happy with something like this. It solves a couple of issues, such as each individual project not needing to keepup to date with all the latest project links, etc…

Yep, and the splash page was rightly removed because there wasn’t much for it to splash in front of, but as the birmingham.io mighty empire grows, it probably should return